REVIEW: Eminence: Cardinal Richelieu and the Rise of France 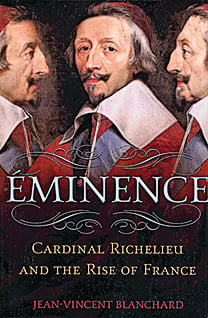 Thanks to endless film versions of Alexandre Dumas’s The Three Musketeers, Armand Jean du Plessis, Cardinal de Richelieu (1585 to 1642)—the power behind the throne of French king Louis XIII—does have a place in the Anglosphere’s pop historical consciousness. He’s the original power-hungry, thumbscrew-wielding despot: just the sort of man Conrad Black, in his days of glory, would dress up as for a costume party. But the cardinal was far more than a cartoon villain, as Blanchard shows in this intricate biography.

Richelieu was one of the architects of the modern political order and the diplomatic relationship between nation-states. He was the man, in fact, who more than any other was responsible for crafting the state as we have known it, an amoral and impersonal power which could, and did, sanction any evil for its own survival, for “reasons of state.”

A prince of the Catholic Church, Richelieu constructed a dizzying array of alliances with Protestant powers to counter over-mighty Catholic enemies. He adroitly manoeuvred his way through an age when the personal was far more political than now, when the passion of an English duke for a French queen—the plot line for Dumas’s novel—wasn’t just tabloid fodder, but had the potential to alter the history of two nations. He was often in poor health and faced popular opposition, a combination Blanchard nicely captures when he writes of the time the cardinal, in agony, was driven to have the relics of St. Fiacre, patron of hemorrhoid sufferers, brought in procession to his home. The next day, Parisians delighted in a comic pamphlet mocking his eminence’s nether regions.

But he did succeed in forcing France into a unified whole ruled by an absolute monarch, an achievement that made France Europe’s ascendant power for the next century, but which also started the nation on the road to the French Revolution.