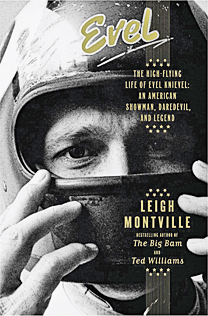 Like the man himself, this biography of Evel Knievel is loud, out-sized, foul-mouthed and frequently outrageous. It also happens to be riveting entertainment. Few might expect that the motorcycle daredevil, famous for crashing into Idaho’s Snake River Canyon during a 1974 stunt, could sustain a 400-page biography. Yet if you can get past the mock stage tones—the entire book reads like a Monday Night Football voice-over—it proves to be a carefully balanced view of one of the most fascinating characters of the ’70s.

Robert Craig Knievel of Butte, Mont., displayed an unlikely predisposition toward danger at an early age. At five, he deliberately ran into a cupboard door and knocked himself out. Growing up he was a schemer and rip-off artist, albeit with a high degree of physical daring. At 21, Knievel organized a hockey game between his team, the Butte Bombers, and the Czechoslovakian Olympic squad prior to the Squaw Valley Olympics in 1960. It ended, as did most of Knievel’s early ventures, with accusations that other people’s money had gone missing.

The stakes got bigger once Knievel found a way to meld his risk-taking and self-promoting ways with motorcycles. His first major stunt involved a jump over a box of rattlesnakes and two sleepy cougars. He hit the big time in 1967 with a failed—but well-publicized—jump over the fountains at Caesar’s Palace in Las Vegas. By the early 1970s, he was one of the biggest celebrities in the U.S.

In charting his rise and eventual decline, the biographer makes plain Knievel’s numerous flaws. He was a violent, untrustworthy alcoholic and a habitual gambler. At the peak of his fame, he purported to be a role model for American youth (children’s toys made him rich—the Evel Knievel Stunt Cycle out-sold Barbie in the early 1970s) yet publicly and frequently cheated on his wife. He was an unpleasant man with a flare for drama and attention. It’s a captivating life, loudly told by Montville.