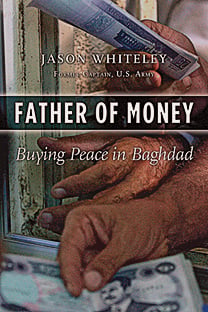 Almost from the moment it began in 2003, the American-led invasion of Iraq has spawned a flood of books on its causes and its course, but few have been as enlightening as this one. In March 2004, then-U.S. Army captain Whiteley was appointed governance officer for al-Dora, one of the most volatile districts in the violent Iraqi capital. His job was to establish and foster a local Iraqi-staffed council, one of the dozens expected to become the seeds that would blossom into functioning institutions in a self-governing state. The key problem facing Whiteley was that he represented one of the most hidebound bureaucracies (the Pentagon) ever known in a district with an imminent need for money and jobs, in a culture that functions by personal word of honour and exchange of favours, legal or otherwise.

Whiteley thought he got the message. Two months into his year-long posting, and finding his council was fast losing authority, unable to tap into any of the quasi-legal economic opportunities in its neighbourhood, he led a convoy of three Humvees of troops to a local scrapyard. There, his men seized a dozen drivers about to take a load of shattered Iraqi military equipment off to Turkey, while Whiteley personally tasered the foreman. When the boss arrived, Whiteley hit him up for an ongoing “tax” of $20,000 per shipment (payable to the council). Thus began Whiteley’s brief career as a player in the Iraqi system: known as “Abu Floos” (Father of Money), the captain was considered a man who kept his word and got things done.

It was exhilarating, Whiteley writes, but also a moral swamp. His quick fixes inevitably alienated one group or another, especially in the face of the larger American failure to establish basic order. When he returned stateside at the end of his tour, it was with the same feeling of personal failure and the same desire to leave it all behind that seems to mark the entire occupation.