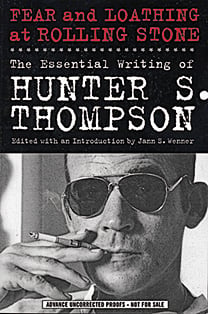 Before he became a parody of himself, Hunter S. Thompson was one of the most gifted, mercurial and acutely observant writers his country has ever seen—a comic American moralist in direct line of descent from Mark Twain. His greatest work was accomplished in the 1970s and revolves around two figures: Richard Nixon—“a hubris-crazed monster from the bowels of the American dream, whose casket should have been launched into one of those open-sewage canals,” or so Thompson declared after the ex-president’s funeral; and Wenner, the Rolling Stone magazine founder who gave the mad journalist his platform. Now that Wenner has gathered a retrospective of Thompson’s RS pieces, he draws heavily (and wisely) from the writer’s miraculous decade.

Fear and Loathing in Las Vegas (1971), its title so resonant that Thompson had a hard time avoiding repeating it with every other book or article he later wrote, was the tale of two men attending the National District Attorneys Association’s conference on narcotics, armed with profound paranoia and an astonishing collection of drugs and booze, including mescaline, LSD, cocaine, quarts of tequila and rum, and “a pint of raw ether.”

The book is so viciously funny and note-perfect in its depiction of the drug-riddled sixties’ sudden downward spiral that pages chosen at random would be entertaining. (The section included here contains Thompson’s essential feeling about Vegas: after consuming nothing but grapefruit and Bloody Marys (“for the V8 nutritional content”) over 24 hours, he’s worried about falling down, something very much to be avoided: “In Las Vegas they kill the weak and deranged.”

Thompson’s other masterpiece, Fear and Loathing: On the Campaign Trail ’72, takes up a full quarter of Wenner’s compilation, and no wonder. Thompson’s hilarious but increasingly desperate account of Nixon’s final—and seemingly irrevocable—triumph was rightly described by Frank Mankiewicz, campaign manager for Nixon’s opponent George McGovern, as “the least factual, but most accurate” version. The perfect summation of all Thompson’s best work.