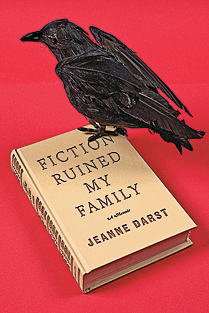 This memoir about growing up in a family of eccentrics opens with the author’s father, the magazine writer Stephen Darst, cashing in his job and the family home and moving his wife and four young daughters from St. Louis to upstate New York with the intent of writing the great American novel he is certain will reverse the family’s fortunes. It gets rejected. Ditto for novel No. 2. The parents’ world of grand delusions dissipates into a cloud of booze, cigarettes, breakup and poverty, leaving the daughters, by now college-aged, to take care of their alcoholic parents. It’s tragic, and yet Jeanne Darst relates it all in a bratty, fearless style of wit and humour that provides a number of laugh-out-loud moments.

The literary life is marbled through this tale: references to celebrated American authors flit in and out of the story like dropped names at a cocktail party; and the father, when he isn’t lost in his own novel, attempts to get his daughters to read real works of literature (“Showing up to meet him for lunch with a John Grisham book under your arm would have been like showing up with no pants on,” writes Darst). The mother, meanwhile, is a comic-tragic drunk of low expectations and high-style drama.

Darst herself fares not much better: she stumbles through college and adulthood mentored by drugs, alcohol and destructive behaviour. Despite its obvious dysfunction, the family sticks together. Beneath the raw nerves that Darst brazenly exposes runs a current of love and even admiration, and she draws each person with a kind of tenderness. Of her psychotic father, to whom she is clearly devoted, she acknowledges: “To have a father who was totally crazy pants who adored you was a special kind of agony.”

Darst herself becomes a writer, and an alcoholic, clinging to the belief, like her father, that writing will redeem her life. A streak of entitlement scorches her humour, and one can feel Darst’s bitterness that the American Dream eluded her family. It’s a score she is prepared to settle.