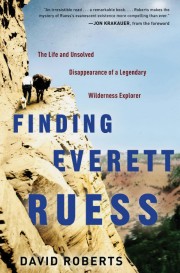 The story of Ruess, who disappeared in 1934 at the age of 20 while on a solo trek through the red-rock canyon country of southern Utah, is a textbook case on the origins of a romantic mythology. Intrepid, a precocious writer and painter, dazzled by natural beauty and deeply romantic in a way scarcely seen since Percy Shelley was going on about the sublime, Ruess had been tramping the American West since he was 16. Bit by bit, his writings became familiar to other wilderness devotees. Passages of exuberant joy (“Once more I am roaring drunk with the lust of life and adventure and unbearable beauty”), contrasting with youthful premonitions of doom (“Bitter pain is in store for me?.?.?.?death may await me; with vitality, impetuosity and confidence I will combat it”), won him posthumous admiration for his ability to express what others felt. Fuelled by endless speculation about his end—Ruess was murdered by cattle rustlers, fell while climbing a cliff, killed himself, married a Navajo and went native—and by books and documentaries, his cult steadily expanded. And then, in 2008, it went supernova.

A dying Navajo woman told her brother what their grandfather had once told her: in the 1930s he had witnessed three Utes rob and kill a young white man. The Navajo buried the body in a rock crevice that his grandson now easily found. Through a combination of desperately hoping it was true, tunnel vision and—above all—a faulty DNA analysis, Roberts (who was deeply involved), National Geographic and a posse of scientists became convinced the bones inside were Ruess’s. Interest in his story spiked sharply. And when a later and more accurate DNA analysis destroyed that conclusion—the bones belonged to a Navajo man—far from dying back, the cult of Ruess exploded yet again. As Roberts points out in his scrupulously honest and absorbing life of a youth who might—or might not—have become a great artist, the mystery is all.