REVIEW: Finding Sarah: A Duchess's Journey to Find Herself 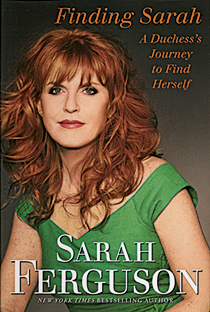 Last year, in one of the most scandalous “gotcha” stories ever produced by the now-defunct News of the World, the tabloid’s reporters pulled off an audacious sting aimed at Sarah Ferguson. Fergie agreed to “open doors” for a “fake sheik” by selling access to her ex-husband, Prince Andrew, duke of York, who is also Britain’s trade envoy. The price was $800,000. Sarah’s life, already in a debt-laden spiral, crashed after the tabloid released a video recording of the sordid encounter. “‘Look after me,” she said, “and he [Andrew] will look after you.”

Though Sarah was advised to lay low for a year, she didn’t. Instead, she cut a deal with Oprah Winfrey to go on a journey of self-discovery, with a camera crew capturing her every moment. The result is a miniseries and this book, which lays bare some of her most painful memories and feelings, especially her realization of how much she’d hurt her fiercely loyal daughters Beatrice and Eugenie. “How could they possibly love Fergie for behaving in such a way,” she wrote. “I feel I have let so many down. My self-hatred and self-punishment is rampant. I cannot forgive myself. I need healing.”

While chunks of the book are filled with the usual celebrity self-help encounters with spiritual advisers (even the obligatory shaman), as well as stays in personal transformation retreats, it’s the sections chronicling her turbulent life—her mother abandoned her young daughters for an Argentine polo player—that reveal why Sarah, now 51, changes directions like an overeager puppy and lurches from crisis to crisis. Though she often tries to justify her actions, it’s left to Dr. Phil to deliver the hard truth: “You need to realize: ‘It’s not anyone else’s fault that I am the way I am. I have the power to choose who I am going to be and how I am going to live my life.’ ” The next move is up to Sarah.