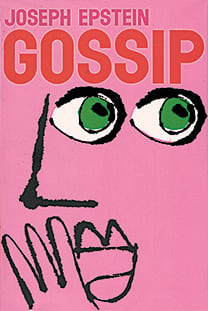 Reading Gossip, it’s hard to decide what is more intriguing: the book’s clever insights into gossip’s workings or the volume of scuttlebutt shoehorned into its 219 pages. Epstein’s narrative bristles with items about the identity of Annie Leibovitz’s sperm donor, Harold Pinter’s “pukey little poems,” Elizabeth Taylor’s paranoia about her pubic hair, and sundry stories of adultery, incest and plagiarism. There’s even a tepid, recycled nugget about Conrad Black on page 19 that unintentionally illustrates Epstein’s theory that gossip’s power is diluted when spread.

Epstein gossips about gossip with the same elegant erudition that animated his earlier studies of snobbery, ambition and friendship—less concerned with profundity than entertainment. The author, unsurprisingly, is a defender of gossip, or what Earl Wilson, the granddaddy of American gossip columnists, called “hearing something you like about someone you don’t.” Gossip is often false and malicious, Epstein avers, but it’s also “a species of truth,” which is why oppressive regimes block it. It serves as a social connector and occasionally even provides useful information. By exposing behaviour people want hidden—vanities, foibles, hypocrisies—gossip enforces community norms. That we see in his profiles of “great gossips of history,” who include Saint-Simon, the gossip laureate at Versailles during the court of Louis XIV, and Matt Drudge, who calls gossip “unedited information.”

Epstein is not an unequivocal gossip cheerleader, however, recognizing that it’s a distraction that increasingly dumbs down intellectual life. He’s also not pleased about the extent to which it now informs media coverage of news, as leaks, or “well-aimed gossip in political dress,” have new power. The Internet also intensifies gossip’s reach and harm—abetted by a celebrity culture that churns out temporary deities to dish about.

Epstein, who’s more at ease discussing Walter Winchell than Perez Hilton, doesn’t plumb the complexities of gossip as modern marketing tool. But his own name-dropping “diary” woven through the text shows how gossip can be marshalled to elevate one’s insider status and, better, pave the way to a book about gossip destined to be gossiped about itself.