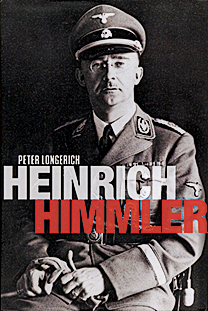 As head of the SS, chief of police, “Reich Commissar for the Consolidation of Germanness,” and deputy führer, Heinrich Himmler—failed chicken farmer, occult believer, homophobe and anti-Semite—managed to achieve power in Nazi Germany second only to Hitler’s. He was as responsible for repressing domestic dissent as he was for the Holocaust. Despite his key role, however, Himmler has never been the focus of a comprehensive biography before this massive effort by Longerich, a distinguished German historian.

That has its upside, of course. A few decades ago, a psychoanalytic approach would surely have grounded Himmler’s destructive life in childhood trauma. Longerich, despite an appropriately keen interest in his subject’s personality, is having none of that. Yes, Himmler was emotionally inhibited and socially backward, especially with women, and that did make the all-male paramilitary world of the Nazis all the more appealing. But his real interest in military life and in violence as the first, best response to any issue stemmed from the fact that—like many early Nazi enthusiasts—Himmler (born in 1900) was just a shade too young for First World War service. His view of war and its cleansing potential was as absurdly romanticized as his desire to return to a racially purified, fantasy Germany. And just as deadly.

Himmler combined his utopian fantasies with the genius for vicious power politics that marks all successful players in totalitarian systems. He always emerged from internecine struggles and betrayals with enhanced powers, and for all Hitler’s absolute centrality to his regime, the way Himmler wove together the tools that came to his hand—the police machinery, the settlement policy, the camp system, the forced labour programs—was also crucial to creating the violence and chaos that defined Nazism. Not the least example of Himmler’s destructive capacity was intense repression of all dissent right up to the war’s last days, aimed to prevent another Great War-style collapse on the home front. That Germany continued to resist long after its cause was hopeless, Longerich argues, “was the work of Heinrich Himmler.”