Review: In the Garden of Beasts: Love, Terro, and an American Family in Hitler's Berlin 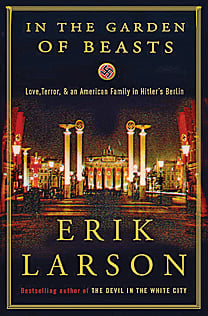 In early 1933, William Dodd was an overworked but politically connected history professor looking for a diplomatic sinecure that would allow him time to finish his opus, The Rise and Fall of the Old South. Instead, in July of that year, Dodd—accompanied by his wife, his son and his pretty and not at all sexually inhibited daughter Martha, 24—took up the post of U.S. ambassador to Nazi Germany. Although the Dodds stayed there until 1937, Larson concentrates on their first 12 months, the year in which Hitler transformed from chancellor to unquestioned dictator. Even as Dodd’s alarm about the regime grew, his government remained preoccupied with the Depression, not very concerned about the fate of Jews or Communists, and convinced that Germany’s new criminal rulers couldn’t last long. The State Department lectured Dodd on the importance of good relations, the better to maintain the flow of German Great War reparations to American bondholders. The increasingly despondent envoy never did finish his history book.

Martha, for her part, was at first enamoured of the new Germany and even more so of her enhanced social life. She embarked on an astonishing series of affairs, several simultaneously, with everyone from a French embassy attaché and the chief of the spy network based in the Soviet embassy to Rudolf Diels, the first head of the Gestapo. (Larson calls him “surprisingly honourable,” and with reason—Diels ended up testifying for the Allies at the Nuremberg war crimes trials.)

Larson succeeds brilliantly at keeping his historical characters anchored in the moment, trying to deal with not just a regime becoming more inexplicable and murderous by the day, but with their own disbelief at what was going on. How the Dodds coped, and what that meant to the remainder of their lives—Martha became a Soviet spy—offers a fascinating window into the year when the world began its slow slide into war.

FILED UNDER: Erik Larson history In the Garden of Beasts