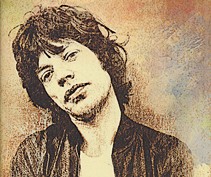 There’s only one reason for this book to exist: to redress the nasty bruising Mick Jagger took in Life, last year’s blockbuster memoir by bandmate Keith Richards. Jagger is not an authorized biography, but it’s such an affectionate portrait that its subject, who can’t be bothered to write his own memoir, could have commissioned it. Spitz, Vanity Fair’s music blogger, doesn’t dig up any new dirt in the royal saga of the Rolling Stones, who mark their 50th anniversary next spring. But he tackles what he calls the Jagger Problem—the popular notion that Mick is the band’s cold-blooded brain and aristocratic gadfly while Keith is its heart and soul, salt of the earth, keeper of the flame—even though he nearly killed the Stones with his heroin habit. Spitz suggests the dichotomy is a media myth, nurtured by Keith’s flair for burnishing his anti-hero image, and Mick’s reluctance to offer anything as banal as a sound bite. Having interviewed both several times, I see his point: talking to Mick is like playing squash with a sphinx; Keith becomes your best mate within minutes.

What the book does best is magnify the seismic events in the Stones’ formative years: the scandal of their 1967 drug bust (with Marianne Faithfull on LSD, wearing only a fur rug and the infamous Mars bar); Jagger’s erotic method acting with Richards’s girlfriend, Anita Pallenberg, on the set of Performance; the swimming pool death of Brian Jones; and the murder of an 18-year-old kid at Altamont in 1970, which Jagger impassively watches on tape in the film Gimme Shelter. But Spitz traces the genesis of the Stones’ tabloid image to a fluke. A News of the World reporter mistook Jones for Jagger in a bar, and Jones, playing along, regaled him with tales of his (Mick’s) wild drug habits. Now Jagger is producing a movie called Tabloid, in which he will star as a Rupert Murdoch-like media baron. Ah, the revenge of the misunderstood rock star—best served stone cold.