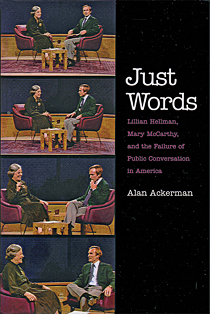 In an episode of Dick Cavett’s PBS talk show broadcast on Jan. 25, 1980, the redoubtable writer, critic and political activist Mary McCarthy, 67, pronounced that everything Lillian Hellman, 74—another redoubtable writer, critic and political activist—ever wrote “was a lie, including ‘and’ and ‘the.’ ” Hellman sued for libel and $2.25 million. In one way it was a tempest in a teapot: whatever legal benchmark might have been set, the case died with Hellman in 1984. Yet in another sense, one Ackerman, a University of Toronto English professor, mines to subtle effect, the lawsuit was also about the U.S. failure to establish norms for public argument in a nation that is more constitutionally committed to free speech and more litigious than any other.

The two women were re-fighting battles within the American left that went back to the Spanish Civil War and Stalinist show trials of the 1930s, battles that mostly turned on whether one stuck by Communism whatever its barbarities because the end—defeating fascism—justified the means (Hellman). Or didn’t (McCarthy). But the long-simmering tensions between them were just as important. During one rare personal encounter, a 1949 cocktail party, McCarthy heard Hellman telling a sneering story about novelist John Dos Passos, who had split with former friends Ernest Hemingway and Hellman after they ignored Soviet involvement in the 1937 murder of Dos Passos’s friend, Spanish radical José Robles. McCarthy denounced her on the spot for slander and left Hellman trembling in fury.

For all its roots in the deep past, Ackerman shows the libel case, with its implicit claim that there was only one true account of past reality (all others being “lies”) and its blurring of the line between private and public, points the way forward to America’s present uncivil discourse. From denunciations of James Frey for fraud for having mixed fact and fiction, à la Hellman, in a memoir, to demanding that Barack Obama release personal documents to counter outlandish claims, U.S. public conversation is now a full-contact sport.