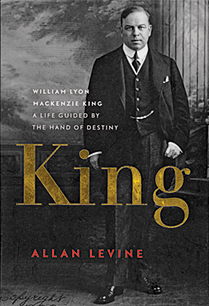 Once upon a time, Canadians objected to the notion that William Lyon Mackenzie King, our longest-serving prime minister, was the embodiment of the nation—“the Canadian as he was first formed in the mind of God,” to adapt a phrase from poet Frank Scott—in his po-faced blandness and fearful caution. (A man who “did nothing by halves that he could do by quarters,” as Scott actually did write of King.) Since then, of course, it has emerged, the real reason for Canadians to recoil from the idea was that in his interior life King was flat-out crazy, a mother-obsessed bachelor who scrutinized his shaving cream for omens and communed with the dead, including Sir Wilfrid Laurier, via mediums.

But until now no one has ever done as magisterial a job as Levine in fusing King’s many parts into a complex but comprehensible whole, and thereby demonstrating—however much we might cringe from the thought—that King may well be us personified after all. He did have his share of good fortune, in his enemies—one unappealing or hare-brained Tory leader after another—and in a quiescent press culture. He wasn’t that secretive about his spiritualism: at a 1945 Christmas party King told the startled governor general about a conversation he recently had with FDR, dead the past seven months. Many people were aware of the PM’s beliefs, but none outed him during his lifetime.

But he was also a politician of genius, as Levine convincingly argues. He was unafraid to appoint strong ministers and broker between them. He was instinctively attuned to Canadian fears, hopes and ambitions. King was as obsessed with national unity as he was with communicating with his dead dogs. He understood Canada’s simmering regional tensions better than any other prime minister—his only possible rivals in that regard, Laurier and Sir John A. Macdonald, had less complex Canadas to govern. And if his own deep-rooted insecurities helped keep him to the maddening maybe-yes, maybe-no approach that saw the country safely through the Second World War’s conscription crisis, well then, he was the right crazy prime minister at the right time.