REVIEW: Lisbon: War in the Shadows of the City of Light 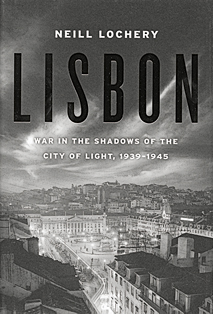 At the outbreak of the Second World War, neutral Portugal was an impoverished authoritarian state on the fringe of global events. Then, almost overnight, its capital, Lisbon, became the place where Allies and Axis kept an eye on each other. That suited the Portuguese dictator, Antonio Salazar, who knew the risks of joining either the Allies (German or Spanish invasion) or the Axis (losing Portugal’s colonies to Britain). The belligerents also accepted the status quo. The Allies in particular desired an escape hatch from the Nazi-dominated continent, and thousands of refugees passed through Lisbon. Toss in the spies (including Ian Fleming, who based Casino Royale on Lisbon’s chic seaside casino in Estoril) and the exiled royalty (including the duke and duchess of Windsor) and Lochery is right: Lisbon was “like Casablanca, only 20 times more.”

And then there was the wolfram, the rare hard metal vital to modern armaments. Portugal was its main European source. Just as the Allies took over an Azores island for an air base (the price of Portuguese neutrality), the Germans made it clear that peace depended upon access to wolfram. That too suited Salazar, who played, in Lochery’s retelling, his limited cards skilfully. The tungsten was forthcoming, but only in exchange for gold, which the Nazis obtained by looting Europe. Portugal ended the war with at least 124 tonnes of German-paid gold (and almost certainly much more), three-quarters of which U.S. negotiators believed was looted.

But those negotiators, who succeded in forcing the return of stolen gold by other neutral nations, were hamstrung by their own government’s desire to keep the Azores base for the new Cold War. In the end, the Portuguese returned just four tonnes. The rest remained as an integral part of Portugal’s slow transition to a modern economy, and as one more of the war’s still-open wounds.

FILED UNDER: Neill Lochery REVIEW: Lisbon: War in the Shadows of the City of Light