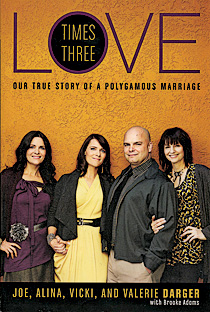 The HBO show Big Love’s depiction of a polygamous fundamentalist Mormon marriage stoked controversy and drew a big audience. Now the family that inspired the series have written an intriguing, rotating, first-person(s) account of their union that produced 24 children. It reveals that polygamy requires more labour and sacrifice than most of us are willing to put into a monogamous marriage.

The Dargers, all raised in plural unions, knew one another growing up. Joe’s simultaneous courtship of cousins Alina and Vicki, though disconcerting, is candidly rendered, with the women experiencing jealousy and insecurity, suppressed passions and much negotiation. Joe and Alina wed legally in 1989; the same day he married Vicki in a church ceremony. A decade later, Vicki’s twin, Valerie, and her five children joined the clan after she was given a church “release” from her union to an abusive husband. Eventually, the quartet began speaking publicly to engender tolerance of what they see as their right to religious expression.

Obvious points of curiosity are addressed. Sexual intimacy (“nothing kinky,” writes Joe) is organized on a rotating nightly schedule; the wives never discuss sex lest it spark jealousy. Polygamy is no male sexual bonanza: “there are easier and cheaper ways for men to get sex,” Joe writes, as only a man with two wives sharing a birthday and two with the same wedding anniversary would know. The women, all distinct and opinionated personalities, view one another less as rivals (though it happens) than as “soulmates.” Their 5,500-sq.-foot, 10-bedroom Salt Lake County house is run with precision but also flexibility. That polygamy renders women vulnerable is addressed, if in passing. Imprisoned Mormon sect leader Warren Jeffs horrifies him, Joe writes, as did some Big Love plot lines—which isn’t surprising. Real life in this case is far more tame.