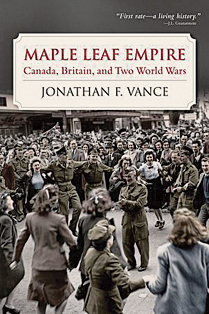 At first glance, it seems a familiar story: Canada, as a loyal child of the British Empire, punches above its weight in two world conflicts while chafing under imperial condescension, develops a sense of nationalism and disengages from the motherland. Yes, but . . . as Vance compellingly argues, Canada’s wartime loyalty was due more to common allegiance to ideals (democracy, the rule of law) that the British Empire was held to represent than to unthinking obedience. And moreover, this nation brought its own influence to the Old Country: close to a million Canadians arrived there during the wars, the founders of our own maple leaf empire.

In the First World War, Canadian barracks—our first “colonies”—sprouted around Britain, although not to the extent they would in the next war when Allied troops were shut out of Northern Europe for four years. Nor were the colonists all men—by 1917 there were 30,000 soldiers’ wives, sisters and mothers present, an influx that merited its own special London club and provided support staff for 40 Canadian hospitals.

Mutual—if at times, wary—regard between hosts and guests usually prevailed, Vance notes, but it wasn’t all, as the British would have said then, beer and skittles. There were riots over postwar delays in getting home, a fair share of crime (one soldier went on a shooting spree, killing two British policemen), and bad blood between Canadians and shopkeepers suspected—often rightly—of price-gouging. On the British side, many a war bride was often justifiably less than enamoured with her new home—one didn’t learn until she arrived in Saskatchewan that the “ancestral home” in the photo her husband showed her was actually the Moose Jaw public library.

Throughout, Canadian nationalism grew in tandem with the Canadian army, from nebulous idea to formidable fighting machine, without impacting the nation’s regard for its British connection. The prevailing metaphor—Mother England and her far-flung children—evolved to a concept of a union of siblings, an evolution reflected in Canadians’ abiding regard for the Commonwealth.