REVIEW: Measure of the Earth: The Enlightenment Expedition That Reshaped Our World 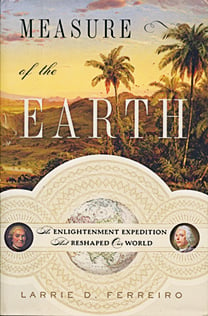 Science is science, and politics is politics, but anyone who thinks the twain never meet should consider the climate change debate. Or read Ferreiro’s detailed account of the first international (France-Spain) scientific expedition, which set out in 1735 to measure a degree of latitude at the equator (in today’s Ecuador) to see if it was the same length as one near Paris. The answer would determine which theory was correct: René Descartes’, that the Earth was elongated at the poles, or Isaac Newton’s, that the force of gravity had flattened the poles. If the Frenchman was right, degrees at the equator should be longer than those further north; if the Englishman had the better model, then the degrees would be shorter. The gentlemen scholars could have aimlessly debated the question for another century if the politicians hadn’t become interested—the answer mattered for ocean navigation and thus for Europeans’ imperialist ambitions.

So the French sprung for the costs and provided the scientists, while the Spanish offered guides and an equatorial proving ground in their South American colony. The men thought they’d be home in three years, but the actual task took three times as long. There wasn’t enough money (the expedition leader, astronomer Louis Godin, lavished a lot of it on his paramour); malaria struck; team members were forced to climb extinct volcanoes inconveniently located where they wanted to measure; suspicious locals thought they were smugglers and Jews, and reported them to the local inquisitor, who was only pacified by an invitation to a pork dinner.

And once the measurement was done, the troubles really began. One scientist had married a local woman, who became separated from him. Portuguese authorities in Brazil refused him entry to pick her up and the couple spent 21 years apart at opposite ends of the Amazon River. They didn’t make it back to France until 1773. Ferreiro dutifully records the scientific advance—Newton, as it turned out, was correct—but rightly stresses the adventure.

FILED UNDER: books Larrie Ferreiro Measure of the Earth politics science the enlightenment