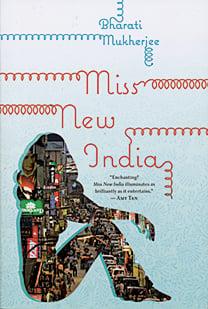 In Mukherjee’s eighth novel, a young photographer tells Anjali Bose, “It’s all a matter of light and angles,” after shooting her (much-doctored) portrait for a matchmaking website. Anjali doesn’t quite understand the expression, but she repeats it to impress people in Bangalore, the booming metropolis in southern India where she goes in pursuit of her dreams (and to escape a brutish groom-to-be). In a way, Anjali is the queen of light and angles, always shifting between two personas—one, the faithful daughter of traditional Bengali parents, destined for arranged marriage and a life of subservience; the other—Angie—a free-spirited young woman, entitled to excitement, romance and, of course, money.

The money is supplied by Peter Champion, an American expat and high school teacher in Anjali’s hometown in the eastern province of Bihar. Champion also helps Anjali settle in a Raj-era mansion where an elderly widow boards young women from “good families.” The girls, like many young newcomers to Bangalore, work as call-centre agents, handling computer crises in Texas and Alabama while trying to “neutralize” their Punjabi and Gujarati accents. According to a mysterious newspaper columnist named “Dynamo,” they are the new Miss Indias. “They don’t simper, they don’t dance (don’t ask them!), and they don’t wear saris or evening gowns,” he writes, swatting at Bollywood. “They will transform our country.”

Through Anjali, Mukherjee trains her eye on this transformation, and it’s a view that changes by the minute. Dynamo’s alter ego—Bangalore businessman Mr. GG—makes Anjali swoon. But then the light shifts, and suddenly she sees him as a “plump, hairy little man in bulging boxer shorts.” From one angle, Anjali’s roommates seem friendly and generous; from another, not so much. While Anjali abhorred her father’s rules, at least they were clear—in Bangalore, she is never sure who to trust. It seems Mukherjee is similarly uncertain. “Prosperity is a good thing,” says Peter Champion at a dinner party. But, he adds, “I wish the prosperity was rooted to something. I wish it built something beyond glass monuments. It seems as flimsy as a kite or a balloon.”