REVIEW: Mr. CSI: How a Vegas Dreamer Made a Killing in Hollywodd, One Body at a Time 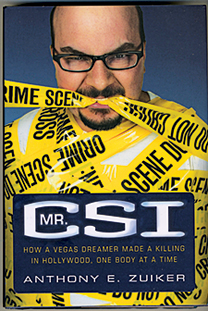 Other TV creators are household names, but Anthony Zuiker is almost unknown after creating the biggest hit TV franchise in the world. This book is partly his attempt to change that by explaining how the CSI empire reflects his own personal vision. It’s also the story of how real-world violence became a part of his life after he made the goriest shows in TV history: the book begins in 2005, at the height of his success, with the suicide of his estranged father—reported to Zuiker, with inevitable irony, by a real-life CSI officer, whose job isn’t as glamorous as the ones on TV.

This tragic story, alternating with flashbacks to Zuiker’s early life in Las Vegas and his eventual move to California, makes Mr. CSI a more interesting read than the average TV-writer memoir. He had no television writing experience when he wrote the script for CSI, based partly on his own interest in forensics and partly on a Discovery Channel show about “police investigators who employed state-of-the-art science” (providing further proof of how much reality TV has influenced scripted TV). Unlike most TV shows, CSI wound up reflecting actual experience, including Zuiker’s Vegas childhood: “You ooze Vegas from every pore in your body,” an agent told him when advising him to set the show there.

But Zuiker leaves some doubt about whether he has the temperament to make a show with more depth than CSI. The book mentions his experience with CSI: New York, the first show he was allowed to run on his own. The early episodes were dark, brooding and haunted by 9/11, but he says he quickly retooled it when the network told him it wasn’t popular enough. The book is sometimes the same, cutting away from his father’s story to deal with feel-good subjects. It seems there’s a limit to how dark Zuiker can allow himself to go.