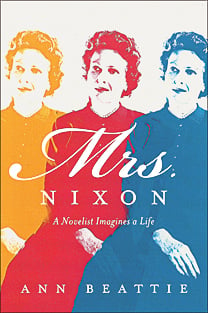 Just who was Pat Nixon, the proper, self-contained wife of America’s most reviled and disgraced president? Of her inner life—her hopes, her regrets, what was running through her head as her family boarded that plane to California in ignominy—there is scant knowledge. Born Thelma Ryan in 1912, Nixon was one of the few first ladies never to pen a memoir; the closest we get is Pat Nixon: The Untold Story, a chirpy biography written by her daughter Julie Nixon Eisenhower.

Now Beattie, famed for chronicling the cynical post-Nixon generation in fiction, unwraps the hermetically sealed “generic president’s wife” in an intriguing, playful piece of literary performance art that melds fact with fiction to explore her own creative process.

Anyone seeking a fully fleshed “reimagining” of Pat Nixon in the style of American Wife, Curtis Sittenfeld’s portrait of Laura Bush, will be disappointed—and perplexed by such chapter titles as “Mrs. Nixon Reads The Glass Menagerie” and “Mrs. Nixon Gets the Giggles.” Beattie, who teaches creative writing and literature at the University of Virginia, explores Pat Nixon less as a person than as a textual conundrum: “Writing fiction about a real person tests my unexamined assumptions,” she explains. She ascribes thoughts and opinions to her subject, offers alternative scenarios to actual events, and even injects herself into a story that may or may not be fiction.

More, she cleverly reveals writers’ habits (poets sleep most, she claims) and her own writerly bag of tricks. Metatextual references abound. One chapter depicts Richard Nixon’s marriage proposal in the style of an F. Scott Fitzgerald story. Another echoes James Joyce’s “The Dead,” rendering Halloween circa 1990 at the Nixons’, where the ex-president greets trick-or-treaters wearing Richard Nixon masks.

A writer of less stature and skill would be branded self-indulgent for eclipsing her subject so boldly. But expect Beattie to be lauded for rescuing Mrs. Nixon from her fate as a Watergate footnote. And she has, in this genre-bending memoir-novel-biography hybrid: now the still-enigmatic Mrs. Nixon is a literary footnote as well.