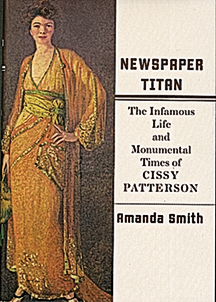 “When your grandmother gets raped, put it on the front page,” was the pugnacious if never observed motto—presumably the occasion never arose—of the Medill family, rulers of the Chicago Tribune newspaper empire. That guiding principle was never supposed to apply to the Medill women, of course, but when 48-year-old Cissy Patterson, who had spent most of her life as a society matron, gained control of William Randolph Hearst’s floundering Washington Herald in 1930, she took to the tabloid life with a vengeance. By 1945, after a merger with another Hearst paper, the Washington Times, the Times-Herald had 10 daily editions and annual profits of $1 million. Almost unknown today, Patterson was unprecedented in her time: sole owner of a major newspaper and perhaps the most influential woman in America.

A classic old-school Republican, hyper-capitalist and deeply isolationist, Patterson usually had kinder words for Hitler than for FDR. And even the war stopped only the pro-Axis comments; her paper remained vigorously anti-Roosevelt. Readers forgave the attacks on the popular president (mostly: one did send a letter bomb), because they loved everything else about the Times-Herald, particularly its enticing gossip columns.

They were in large part the work of well-connected young women (called “Cissy’s hen house” by her male rivals) hired on the cheap—they didn’t need the money—and ferociously protected by Cissy. Kathleen Kennedy, sister of John F., was one, as was her future sister-in-law, Jacqueline Bouvier, who took on the “inquiring camera girl” position in 1951. (There were men on the gossip beat too: one was tarred and feathered in the Virginia woods by the male relatives of a young woman maligned in his column.) Six years after Patterson’s death in 1948, her failing paper was sold off. The Times-Herald had tried to keep up the old winning formula—animals, crime and gossip—Smith writes, but some animating (belligerent, actually) spark was fatally missing.