REVIEW: On Canaan's Side 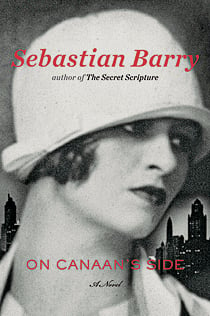 How corrosive is grief, 89-year-old Lilly Bere asks at the outset of Barry’s beautiful, elegiac new novel: “Could it be seen in an X-ray? Is it like a rust, a rheum around the heart?” If anyone has cause to ask, it’s Lilly, as she writes her amazing life story in the 17 days after her grandson Bill’s suicide. Lilly’s life, writ against the history of the 20th century, is crammed with loss of staggering proportion. But the death of the young man she raised from age two proves the final, unbearable burden on her heart.

Her life began with loss, with her mother’s death in Wicklow, Ireland. It continued as her Catholic father, head of police under the British regime, became an “enemy of the new Ireland.” Her beloved brother Willie’s death in the Great War set off events forcing Lilly’s lifelong exile from her homeland and family. America brought hope, often dashed. She loved and lost two men in stunning circumstances, worked as a domestic, raised a son, baked a pie for Dr. Martin Luther King Jr., and saw wars destroy those she loved.

A lesser writer would have made melodrama. But Barry, whose ability to craft heart-stopping moments is given full flight here, has created a riveting, unsentimental portrait reminiscent of James Agee’s Knoxville: Summer 1915 and James Joyce’s short stories. But Lilly is an original—humble, pragmatic, empathetic and thoroughly Irish with her qualified negatives: “It hadn’t been good news,” she writes, recalling the latest devastation.

As Lilly plays the film reel of her life, it’s “nonsense things, the deepest most important things” that remain—a happy roller-coaster ride, her son Ed’s first word, Bill’s faded blue shorts, sitting on a beach looking at a “strange map of blue veins on my upper legs, a map to nowhere.” She’s a “grateful relic” for what she was given, if not what was taken. “The devil only comes into good things,” she concludes, with an optimism that makes one smile and weep.

FILED UNDER: On Canaan's side Sebastian Barry