REVIEW: One Click: Jeff Bezos and the Rise of Amazon.com 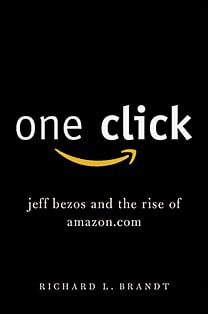 Amid the flood of tributes to the late Apple co-founder Steve Jobs, it might seem like an unfortunate time to come out with a book about Jeff Bezos and his online retailing giant, Amazon.com. But in some ways, Bezos’s achievements are just as impressive, and perhaps more instructive for would-be entrepreneurs. For one thing, Amazon is one of the few dot-com companies that not only survived the tech crash, but cleverly reinvented themselves over the years. Named for the mighty river, Amazon began in 1995 by selling only books, and quickly expanded to everything from appliances to patio furniture. Amazon was also among the first to achieve success in tablet computers with the 2007 release of its Kindle e-reader, and is becoming a major player in streaming media and cloud computing, taking on companies like Google, Netflix and Apple in the process.

Brandt details Bezos’s early days in the financial services industry, and the entrepreneurial drive that led him to create what he dubbed the “world’s largest bookstore,” even though Amazon initially stocked fewer titles than most neighbourhood shops. Like Jobs, Bezos is frequently described as “brilliant” and maniacally devoted to providing the best possible customer experience (people initially thought he was crazy for allowing negative book reviews on the site), although he comes across as less of a dreamer and more of a methodical empire builder. Bezos chose books because they offered the greatest Internet potential in the mid-1990s, when people were still wary of conducting transactions on the Internet. Books, he reasoned, had widespread appeal, were easy to ship, and lent themselves to being searched on a website (and titles already had a unique ISBN number, making it relatively easy to create a database).

Yet, despite Amazon’s frenetic growth, the company didn’t post a single quarterly profit for its first seven years. Bezos firmly believed that keeping customers happy was ultimately more important to Amazon’s future than satisfying Wall Street, once quipping that Amazon’s reputation was “worth a lot more to us right now than money.” It paid off. Amazon earned US$1.15 billion last year. Bezos may never achieve Jobs’s cultural icon status, but his story will be studied in business schools for years to come.