REVIEW: Popular Crime: Reflections on the Celebration of Violence 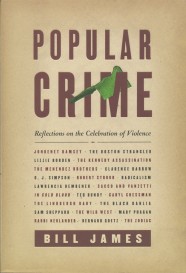 James’s baseball books made us take baseball seriously. Popular Crime tries to do the same for gruesome tabloid stories. Framed mostly as a series of short, anecdotal chapters in the author’s famously argumentative style (“That sounds pretty stupid to me,” he says about medical evidence in one case, “but what do I know, I’m not a doctor”), the book recounts the murders and other crimes that have seized the U.S.’s attention since its inception, from Lizzie Borden and Mary Phagan through O.J. Simpson. Even Casey Anthony turns up, though the book was published before her acquittal. James mentions that Anthony was bound to get a lot of coverage because she “is a very attractive young woman, and she lived to party.”

What James wants to demonstrate is that these crime stories “are very often the basis on which new laws are proposed and old ones modified.” Sometimes coverage of an individual case can even change society: whitewashed portrayals of Robert Stroud, the “Birdman of Alcatraz,” led to “careless application of the principles of prisoner’s rights” and thereby to the modern backlash against the rights of the accused. Just as baseball gets us interested in math and probability, James says, “we were, in our involvement in the O.J. Simpson case, asking ourselves very, very serious questions.”

It sometimes feels as if James could make his arguments more convincingly if he would slow down and make them without rambling so much. He offers a system for “categorizing crime stories” to figure out whether they will be media favourites but, unlike in his baseball books, in Popular Crime, James doesn’t take time to develop a full-fledged methodology. And when he offers his opinions on whether people were actually guilty or innocent—like his explanation of why Lizzie Borden could not have killed her parents—we can sometimes be uncomfortably reminded of the time he argued that Pete Rose might have been framed.