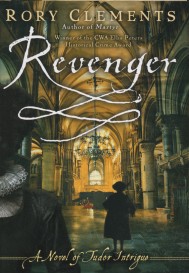 As the sun sets on the reign and life of Elizabeth I, speculation ignites over her successor. Much jockeying ensues in the campaign to be next in line to the throne: will it be James I of Scotland? The Spanish Infanta? Or, lurking behind door number three, the ambitious and caddish Earl of Essex?

Enter John Shakespeare, a Tudor version of James Bond (that is, if Bond had a wife and a struggling playwright brother named Will). Shakespeare is hired by two influential and cunning players with their own agendas who each dispatch him with seemingly random directives to dig up evidence of a plot against the Queen. Throw in several grisly murders, a wife whose affections for her husband have turned sour, a Catholic-hating courtier, a vengeance-fuelled Irishman, a lone survivor of the lost colony of Roanoke, a royal wedding that could bring the country to the brink of insurrection and the discovery that brother Will has taken on a writing gig that could cost him his life, and you have more threads than a tailor’s spool rack.

They eventually come together in this taut, clever thriller. The action is fast and furious, shifting from one precarious episode to another and turning this into a terrific page-turner. Clements is so masterful in his depiction of the Elizabethan era that you can’t help feeling a part of the action, whether it’s among the tangled sheets in a courtesan’s bed, racing along the docks of a clamorous shipyard or sitting in the ruins of a stone crofter’s cottage listening to a hunted woman spill the beans about a tragic expedition.

Readers will be tempted to consult their history texts and/or Google to try and separate fact from fiction. It is a predicament that also confronts Shakespeare the fictional spy, as he finds himself wading deeper into the murkier waters of his aristocratic employers, trying to determine who is honest and who is setting him up. Everyone has a story, and everyone has a score to settle.