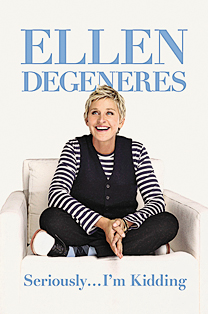 Since her last book, The Funny Thing Is, in 2003, much has happened to Ellen DeGeneres. She hosted the Oscars, married Portia de Rossi, started a record label, debuted on Broadway, became a talk-show host and a spokeswoman for Covergirl—a 50-year-old cover girl and an openly gay cover girl, at that. Most readers of her new book will be fans of the show, hoping for more of Ellen’s loopy charm.

As an extension of her talk-show personality, Seriously . . . I’m Kidding is a success. It has funny rants about meditating, gambling, Portia’s addiction to hand lotion, their pets and punctuality. As a book about the last eight years of DeGeneres’s life, it’s an artful dodge. She tries too hard to entertain readers, and forgoes thoughtful reflection. The substance of the book is supposed to be advice from DeGeneres about how to be happy. She throws out predictable chestnuts like enjoy every day, accept yourself, get a mammogram and colonoscopy and think positively. What are missing are personal stories. The result feels less intimate than an episode of her show. Some chapters are so empty generous readers will suspect they’re satirical—Ellen’s spoof on the genre of comedy autobiography.

Still, a few chapters nearly redeem the entire project. Her “Letter to Mall Security” is priceless, as is her riff on endorphins. She speaks honestly about the difficulty of hosting a daily talk show and being a gay role model. “[When I came out], there were extreme groups that didn’t think I was gay enough. There were other groups of people who thought I was too gay. It didn’t occur to me that when I announced I was gay I would have to clarify just how gay I was.” DeGeneres also speaks openly about her and Portia’s decision not to have children. These candid moments are too few. Ironically, Ellen could take a page from Portia’s book, The Unbearable Lightness, which is more accomplished, personal and entertaining.