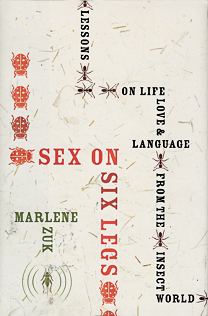 Entomologists have crafted some of the best popular science prose. That’s partly because those who love such generally unloved creatures as insects really love them, and their enthusiasm is infectious—Zuk, with her abiding passion for crickets, is no exception—and partly because bugs are inherently interesting: both surprisingly familiar and frighteningly alien. Nothing grabs her students’ full attention, the University of California biologist dryly notes, like the news that a male honeybee’s genitals explode after sex.

That’s just another detail in the high-stakes sex lives of male insects: everyone knows what female mantises do with their mates’ heads (expectant mothers need sustenance), and Zuk is almost gleeful in her description of the reproductive dilemma of a male cricket surrounded by acoustically orienting parasitic flies. Male crickets have to chirp to attract a mate, an act that also attracts a fly that deposits tiny, burrowing larvae on him; over time the maggots consume the entire cricket from the inside out. The dilemma, of course, is what to do: stay quiet and fail to breed or call out and risk death. The crickets, like most of creation, usually roll the dice.

And therein lies the true fascination of insect studies: they have a lot to teach us. Cutting-edge biology—genomes and nerve cells and evolutionary paths—is most effectively studied with bugs. Fruit flies and bees last shared a common ancestor 250 million years ago; in comparison, all mammals are essentially identical. Yet humans and social insects have ended up with a lot of similarities—in the ways we organize complex societies, raise offspring and make group decisions—raising anew the old question about what makes us stand out in the animal kingdom. We’ve always tried to answer that by comparing ourselves to our closest relatives. Zuk makes a compelling and engaging argument for looking far, far away.