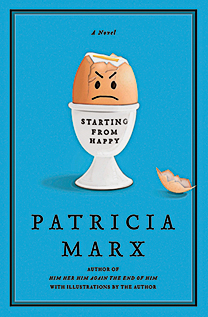 When a former Saturday Night Live writer and the first woman elected to the Harvard Lampoon writes a novel, you can expect hijinks. And Marx, best known for her New Yorker “On and Off the Avenue” pieces, delivers. Her second novel chronicles an unconventional love story: “perfect guy” Wally, a scientist, falls in love with emotionally distant lingerie designer Imogene, who doesn’t care for perfect types. Their story unfolds in 691 “chaplettes.” (If you’re looking for proper chapters, warns the author up front, then “adios muchachos.”) Marx also includes her own illustrations (musical interludes, pie charts and diagrams of pasta shapes, for example), a who’s who of characters, including Patty—the voice of the author herself—and a farcical index.

When Imogene finally decides to move in with Wally (who shares a Mediterranean spur-thighed tortoise named Stuffy with his ex), it comes out of left field. In fact, her disinterest in him, and most things, is so great that it’s hard to imagine why Wally falls in love with her in the first place. But there are endearing moments, especially relatable for anyone who’s felt the cold touch of domestic complacency: one night Imogene counts the number of divorced friends she has in order to lull her to sleep and at number 44, Wally kisses her on the forehead. But Imogene doesn’t stir: “She was considering whether she would ever leave Wally.”

The self-referential bits are funny at first, as when Wally asks of Imogene, “Do you think we’ll be in this book long enough for them to hear me stop pleading with you?” But, along with many of the illustrations, they leave sensitive types longing for more intimacy with the characters so that when momentous plot points pass, like the birth of children or the death of a parent, they aren’t accidentally glazed over.

And for those still concerned with the brevity of Marx’s chaplettes, she reminds, in her own voice as Patty, “Have you checked out life lately?”