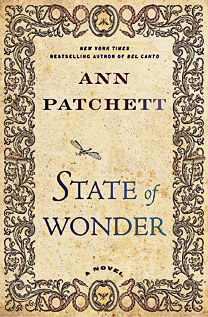 Sending a protagonist on a soul-searching journey down a river and deep into a jungle suggests Patchett is ready to rumble with the literary big boys—Conrad, Bellow, Marquez, et al. And her spellbinding, gorgeous new novel proves she’s equal to the task. Patchett’s heroine, Marina Singh, a 42-year-old pharmaceutical researcher, is sent to South America to piece together the reported death of a colleague and close friend while he was visiting a company project—an off-the-grid field team led by the formidable Dr. Annick Swenson. The team is investigating an Amazonian tribe whose females remain fertile into old age, a discovery that could yield “the equivalent of Lost Horizon for American ovaries,” a prospect the childless Marina finds “chilling.” She sets off, reluctantly leaving behind her boss, with whom she’s romantically involved.

Marina’s adventures, first in Manaus, Brazil, then in the sweltering jungle, are rendered in nuanced detail—from her attendance at a foreshadowing performance of Gluck’s opera Orfeo ed Euridice to a confrontation with a deadly anaconda. Patchett skillfully transports the reader into an exotic, fully articulated universe, then writes passages so breathtaking they demand rereading. Astute observations fill every page, even about seemingly mundane subjects: “Why did airports always have such ridiculously high ceilings?” Marina asks as she’s about to depart. “Was it meant to ease you into the notion of flight?” Weightier matters—scientific ethics, choices made for love, civilization’s exploitation of indigenous people—receive fuller airing.

In finding nothing as she expected, Marina is transformed too, most of all by her relationships with a 12-year-old deaf native boy and Swenson, a remarkable character, who shares a scientist’s credo: “Never be so focused on the thing you are looking for that you overlook the thing you actually find.” If one line sums up the wonder of this amazing novel, it’s that.