REVIEW: The Anatomy of Israel's Survival 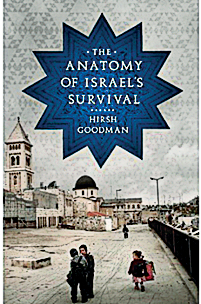 This book explains why Israel has survived, argues why it will continue to do so, and warns of the kind of country it risks becoming unless it stops occupying Palestinian territories. Goodman, an Israeli scholar and journalist, addresses the dangers that Israel faces from nearby states and judges none of them to truly threaten the nation’s existence—even those from a nuclear Iran. Indeed, these threats have driven Israel’s innovation in military technology and strategy, which both makes it stronger and benefits its civilian economy. Unlike many in Israel, he is encouraged rather than worried by the upheavals of the Arab Spring, believing democracy’s spread will ultimately benefit everyone in the Middle East, Israelis included.

Israel’s more serious challenges are internal. Ultra-orthodox Jews are growing in number and remain, by and large, separate from the rest of Israeli society, as are Israeli Arabs. Both groups must be better integrated.

Because of higher birth rates among Palestinians, there will soon be more Muslims and Christians living in all the territory Israel controls than there are Jews. “The choice is blatantly clear: between Greater Israel or Democratic and Jewish Israel,” writes Goodman. Israel must shed territory and disengage from land it has occupied since 1967—ideally by striking a peace deal with West Bank Palestinians, unilaterally if necessary. (The most that’s achievable with Hamas in Gaza, says Goodman, is a long-term truce.)

Goodman knows this will be difficult, even wrenching. And he says total Jewish withdrawal from territory that will be ceded to a new Palestinian state may not be feasible, suggesting thousands of Jewish settlers will remain in the West Bank as expatriate Israelis, paying taxes to a Palestinian government.

But Israel’s occupation of Palestinian lands must end, he argues, as much for Israel’s sake as for the Palestinians. It wastes resources, divides Israelis, and erodes Israel’s moral fibre. “If I were to draw a gun and shoot a Palestinian throwing a stone on my street in Jerusalem I would be locked up for a long time. If I did so in Kiryat Arba or Jewish Hebron [Jewish settlements in the West Bank], I would be a hero,” he writes. “The dichotomy is morally debilitating and destructive.”

FILED UNDER: Hirsh Goodman The anatomy of Israel's survival