REVIEW: The Cat's Table: A Novel 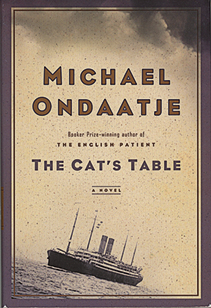 Michael is an 11-year-old boy who boards an ocean liner in Ceylon in 1954 for the journey to London, to reunite with his mother. On board he falls in with two other boys—the careful Ramadhin and the outrageous Cassius. The trio, parentless, deracinated, only partially conscious of how changed they’ll be by exile, terrorize the ship. They spy, pilfer and smoke bits of cane torn from the furniture. Stealing into the labyrinth of Aden, they spot female shipmates disguised as men, hide a forbidden dog aboard, then sidestep the consequences. In a tour de force of swashbuckling narrative, Ramadhin ties Michael and Cassius down so that, Odysseus-like, they can feel the full strength of an ocean storm. Each evening they eat at a lowly spot dubbed the “Cat’s Table.”

The effect, the collage of character and vignette, is a picaresque tale that’s as close as Ondaatje has ever come to a page turner—a detective yarn with boy sleuths, a mysterious prisoner kept in “hellish chains,” told with all the fantastical detail of magic realism.

The Hyderabad Mind, leader of a theatrical company, reads the thoughts of strangers, his “ghoulish eyes…full of sulphur and perception.” Deep within the ship, a botanist tends a garden of marvellous plants, some poisonous, others hallucinatory. The suave Baron C. slathers young Michael in oil and forces him through transoms, the better to rob first-class passengers. Catching himself in a mirror mid-heist, Michael sees “a wild boy in there, somebody from one of the Jungle Book stories whose eyes watched me, white as lamps.” Adds the narrator: “It was the image of my youth that I would hold on to for years—someone startled, half formed, who had not become anyone or anything yet.”

Much will be made of the fact that another young Michael—Ondaatje himself—once left Colombo by ship; here he has refashioned himself into a stranger, to startling, enchanting effect.