REVIEW: The Codex Canadensis and the Writings of Louis Nicolas

Book by François-Marc Gagnon with Nancy Senior and Réal Ouellet 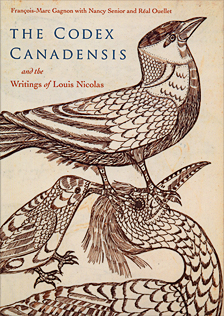 This eye-popping manuscript represents an attempt by a 17th-century French Jesuit, Louis Nicolas, to capture the life of the New World—flora, fauna and human—in writings and 180 pen illustrations (often watercoloured) of plants, fish, birds and 15 individuals, mostly tattooed and pipe-smoking, from woodland First Nations communities. Most of the illustrations are identifiably realistic, especially the birds and plants, and some—notably the unicorn—are not, but they are all part of a pre-modern European’s attempt to come to grips with the strangeness of North America.

The history of the manuscript is as mysterious as its author’s imagination. It was already 250 years old when it first emerged in 1930, entirely without provenance, in the possession of a Parisian bookseller. Within four years it disappeared again, not to re-emerge until 1949 when it was bought by Thomas Gilcrease, an eccentric Oklahoma oilman with a mania for collecting Americana. (And that is why one of the most beautiful and informative of Canadian artifacts resides in a museum in, of all places, Tulsa, Okla.)

It was not until the 1960s that Canadian scholars were able to tie the work to Nicolas, who travelled widely in New France between 1664 and 1675. He was not, as Gagnon dryly remarks, “your ordinary Jesuit.” He got into trouble with his brother priests for training two bears to perform circus tricks on the grounds of the Jesuit compound near Quebec City, and he seems more interested in the manners and customs of native peoples than in their souls.

Nicolas lived at a moment in Western history poised between old learning and modern science. He could believe in unicorns precisely because of the new emphasis on direct observation. Which was to be preferred, Nicolas wrote: the reports of brave travellers “who have seen rare things” or the scoffing of savants who had “never lost sight of their parish church tower”? The former, for a man who thought anything was possible after the marvels he himself had seen and so wondrously recorded.