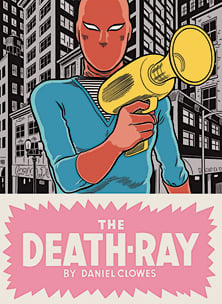 Mere weeks after the 10th anniversary of Sept. 11 comes The Death-Ray, the famed graphic novelist’s oblique reaction to that horror. The superhero fantasy uses the conventions of the genre—a masked hero, inhuman strength and sci-fi gadgetry—to explore the toxic effect of power. It amounts to a devastating portrait of American decline.

Luxuriously drawn and gloriously printed in Day-Glo colour, it presents a tale, set during a beautifully realized 1970s, of Andy and Louie, teen castoffs from troubled homes. When Andy, an orphan whose father was a scientist, smokes a cigarette for the first time—a fabulously mundane trigger—it unlocks superhuman strength. “I thought about Lon Chaney, Jr. and that horrible, haunted look Larry Talbot got when the moon was full,” he says. “Was I going to kill someone and forget about it by tomorrow?”

Evidently Andy’s mysterious father has treated him with a hormone designed to unleash terrific strength upon exposure to nicotine: Andy uncovers notebooks full of his father’s explanations, as well as instructions that lead the boys to another comic-book staple—a ray gun that makes things disappear. Its power and Andy’s cigarette-fuelled strength make him formidable; Andy keeps smoking and accepts it all. Soon Louie persuades him to get rid of a threatening character in Louie’s life. It’s a dramatic moment, yet Andy is unfazed—so much so that Louie is revolted by his lack of doubt and resolves to limit Andy’s power.

Best known for Ghost World, later made into a film, Clowes is associated with the slacker chic of the ’90s. This is the first time The Death-Ray, published as a pamphlet in 2004, has received appropriate treatment—a handsome edition by Montreal’s Drawn and Quarterly, issued in advance of a film now under development by Jack Black. It’s not for the squeamish—it begins with a middle-aged Andy and a defecating dog; in the next panel, Andy is cleaning up. “I don’t smoke anymore,” he says, though he’s “fallen off the wagon a few times.” Louie’s gone, and Andy is still too full of certainty.

FILED UNDER: Daniel Clowes The Death-Ray