REVIEW: The End of Everything 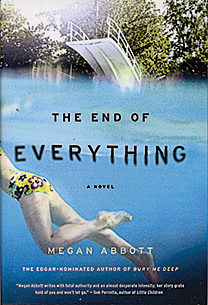 Thirteen-year-olds Evie Verver and Lizzie Hood have been next-door neighbours and best friends their whole lives. As little girls in matching checked swimsuits and muddy-coloured bobs, people couldn’t tell them apart. Sometimes Lizzie gets confused, too, and will catch herself looking for the scar on her leg, then remember that the scar is Evie’s. Lizzie is also steeped in the lore and culture of Evie’s family, privy, for example, to the tantalizing secret that Evie’s glamorous and unfathomable older sister Dusty is named for the artist whose album her parents listened to 16 times on the night she was conceived. Evie and Lizzie spend many a night eavesdropping on Dusty and Mr. Verver as they sit on the back patio and mock the amorous overtures of Dusty’s admirers. “I bet it popped out,” Mr. Verver teases Dusty one evening, when she describes how she ejected an earring from her date’s trachea by hitting him on the back. Listening to father and daughter howl in subversive delight, “All I could think was how wondrous it was—oh, the two of them,” Lizzie remembers later.

That was five days before Evie disappeared, and a rare moment in which Lizzie found that she couldn’t read Evie’s thoughts. In fact, Evie had become increasingly opaque in the weeks before she went missing. But she did let it drop that a man had been watching her—her, not Dusty—through her bedroom window at night. Lizzie reports this critical clue and unearths several more, winning Mr. Verver’s shining gratitude and attention.

A child disappears, a family drama bubbles up—it is a narrative device common to literary mystery fiction, but few authors employ it as skilfully as Abbott has in her sixth novel. Beneath a story tight with suspense, she pokes at even spookier questions: what if a girl who was kidnapped wanted to be taken? What if a father makes his daughter feel so special that she never wants to grow up? And, when it comes to sex, how does a young woman decide what to give and what to take, what to sacrifice and what to save?

FILED UNDER: Megan Abbott The End of Everything