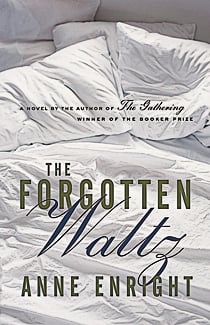 On New Year’s Day in Dublin, Gina Moynihan is at a party hosted by Seán Vallely and his wife, Aileen. At the end of the evening, Gina goes to collect her coat from an upstairs bedroom. Seán follows Gina and kisses her—it isn’t the first time—as his nine-year-old daughter Evie walks into the room. Evie laughs and yells, “Happy New Year!” The Forgotten Waltz, the latest novel from Anne Enright, who won the 2007 Man Booker Prize for The Gathering, tells the story of Gina and Seán’s affair. When they first meet, Gina is a young woman growing bored in her marriage: she calls her husband Conor “low and burly,” and “my idea of fun.” Seán, though, is aloof and charming, “with too sharp a crease in his summer pants.” He’s also a father to Evie, a fragile child who suffers from seizures. Evie’s parents—especially Aileen, who appears frantic and anxious to Gina—are consumed by her care.

Enright is a wonderful observer of human nature, and through Gina’s eyes she captures the evolution of the affair, from early, all-consuming infatuation to denial and disappointment. Once the relationship is finally exposed, and both marriages start to crumble, Gina begins to wonder whether it was worth the price they both had to pay. “Myself and Seán have loved a whole litter of For Sale signs into being,” she says. Unfortunately, Dublin is snowed under, she says, and “no one is about to buy anything.”

Gina calls Seán “the love of her life,” but as she gets to know him, she starts suspecting the affair has meant something different to both of them. It’s Seán’s relationship with Evie that really defines him; if it wasn’t for his daughter, Gina says at the beginning of the book, none of this might have happened. Even so, “the fact that a child was involved makes everything that much harder to forgive.” The Forgotten Waltz is a smart, sad, funny and beautiful book.