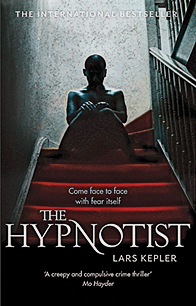 It didn’t take long for the enormous popularity of this thriller in its native Sweden to out the literary couple—novelists Alexandra and Alexander Ahndoril—behind a pseudonym adopted, in part, as a tribute to Girl With the Dragon Tattoo author Stieg Larsson. (Three weeks, in fact, once the media pressure went into overdrive when it was announced the movie version would be helmed by Oscar-nominated director Lasse Hallström.) The nod to Larsson is ironic, given that there is more real dread and sorrow, and far better writing, in The Hypnotist than in all three volumes of Larsson’s Millennium trilogy combined. Not only does evil beget evil over generations—the sins of the fathers (and mothers) graphically laid upon the children—no good deed goes unpunished either. It’s very Swedish, somehow evoking both loneliness and claustrophobia at the same time, disturbing to read, and very, very good.

Shortly before Christmas, almost an entire family is slaughtered in a Stockholm suburb, two parents and a two-year-old girl literally sliced to ribbons. A 15-year-old son, Josef, though cut by as many knife wounds as the others, is still alive; so, too, is an older daughter no longer living at home. Detective Joona Linna is certain that the killer is searching for the absent sister, and that he must penetrate Josef’s coma for the information the police need to reach her first. Linna turns to a doctor who gave up hypnotism for good reason 10 years before. Convinced of the emergency, though, Erik Bark acquiesces. That decision, made for the best of motives, sets in motion a new and equally gruesome series of events.

For all the gore, the novel is primarily a psychological tale, full of twists and turns, and profoundly realistic. Even the happy ending betrays subtle hints that this kind of violence to body and soul can never be considered over and done with: everyone in The Hypnotist is changed by what happens, and not always for the better.

FILED UNDER: Lars Kepler The Hypnotist