Review: The Murder of the Century: The Gilded Age Crime That Scandalized a City & Sparked the Tabloid Wars 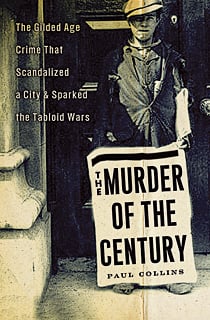 It’s New York in June 1897, and William Guldensuppe’s body parts are popping up all over. The city’s lumbering police department, still mired in corruption and incompetence, is slow off the mark, but its notoriously competitive newspapers race into action. And all a reader of Collins’s entertaining, fast-paced account of events can say is—ah, the good old days.

Two main press protagonists went to the mat. The established champ was Joseph Pulitzer’s World, which had grown rich on a mix of lurid stories, the first colour comics ever, and splashy stunts—when Jules Verne was big, Pulitzer sent pioneering female journalist Nellie Bly to see if she could get around the world in 80 days (she only needed 72). The up-and-comer, just starting to eat the World’s lunch, was William Randolph Hearst’s Journal. Hearst loved headlines like “Genius has conceived a plan for a machine that will kill everybody in sight,” and indulged in catchy promos and populist fare as much as Pulitzer. He was just better at it, and faster.

Journal reporters, nicknamed the Murder Squad, dashed about New York on bicycles, carrying (licensed) pistols, and beating World staffers—and the cops—to key pieces of evidence and potential crime sites. Hearst himself pedalled 50 blocks to a flat occupied by one potential suspect after he learned she was abandoning it to catch a steamer to Germany; he thought it might be the murder scene so he rented it on the spot, posted his reporters at the door to keep Pulitzer’s out, and had the cords to nearby pay phones cut to short out World communications.

As for the crime itself—a love triangle gone bad—it was almost, but not quite, as interesting as the entertaining bout of yellow journalism. Winning that was the making of Hearst, sending him past Pulitzer in circulation and opinion-moulding power, and forcing his rival’s slow retreat to respectability (later cemented by the bequest that still funds the Pulitzer prizes in journalism). Given the influence Hearst was credited with in fomenting the Spanish-American War the following year, Guldensuppe’s death may rank as one of history’s most influential murders.