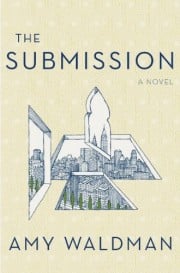 Two years after 9/11, a jury of art experts gathers to select a winning design for a memorial to the victims of the attack. To combat charges of elitism, the jury includes a widow representing the victims’ families and the competition is blind—entries are anonymous before the jurors. That explains how they managed to select an American-Muslim architect named Mohammed “Mo” Khan. Would Khan’s winning submission be built? This is the central question in The Submission, Amy Waldman’s steely novel about the shifting nature of bigotry, grief and ambition.

When the winner’s name is leaked to the press, the country convulses. We meet rabid talk radio hosts, slick Muslim activists, a haughty artist, a journalist with no moral compass and Claire, the widow who lobbied for Khan’s submission. The winner of the competition needs to be approved by the governor, an opportunist who sees the issue as her springboard to the White House. When Khan’s submission is further scrutinized, alarm is raised over the possibility that his garden design contains an Islamic martyr’s paradise. Maybe yes, maybe no. Mo isn’t talking. He refuses to “reassure his own compatriots that he wasn’t to be feared.” He’s an urban artsy, after all, with no interest in religion, but America isn’t convinced. Should the jury demand clarification?

Waldman is especially talented at capturing the internal politics of the jury and the angling of interest groups, airing every opposing opinion. The back and forth is interesting until the three-quarter mark, when it gets a bit laborious. Yet the central question of The Submission keeps readers invested to the last page. Waldman’s book earns its place on the bookshelf beside other notable 9/11 fiction, like Don DeLillo’s Falling Man and Ken Kalfus’s A Disorder Peculiar to the Country. It brings to the category a cool-headedness that comes with distance and hindsight. Some readers may question Waldman’s decision to make Mo so unlikeable, but nobody comes across well in this book—not even the widow. That took guts.