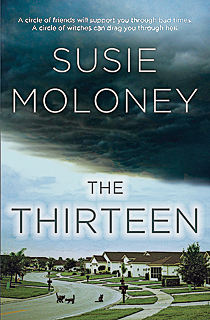 In horror writer Susie Mol­oney’s long-awaited fourth novel, time is running out for a coven of suburban witches in Haven Woods. Magic gave them everything they’d dreamed of, but now one of their circle of 13 has died, and things are beginning to fall apart. One of the group, a successful baker, hears a terrible screeching in her head whenever she tries to bake, while another, newly thin, finds pots of irresistible food bubbling on her stove, which she manages to shovel into her mouth despite the fact that her fingers have begun falling off. The women desperately need a 13th member, as well as a fresh young sacrifice.

Enter Paula Wittmore. The call she gets from one of her mother’s oldest friends seems innocent enough—her mother Audra is ill, and it’d be best if Paula and her 12-year-old daughter Rowan returned to Haven Woods, where life is almost always perfect, but for the occasional gruesome and deadly accident. As Paula tries to work out what exactly is making her mother sick (yellowing eyes, white hair sprouting from her body), and why Audra seems so desperate for her daughter and granddaughter to leave, she learns that her mother’s 11 closest friends have fallen on hard times of their own, and she and Rowan are just in time to play frightful roles in the witches’ plans to turn things around.

Moloney has been called Canada’s Stephen King, and the Winnipeg-raised author attracted buzz in the late ’90s when her novel The Dry Spell earned a seven-figure advance and was later optioned by Tom Cruise’s production company. The Thirteen is a creepy-fun read, with characters ready-made for a Hollywood casting call.