REVIEW: The Three of Us: Growing Up with Tammy and George 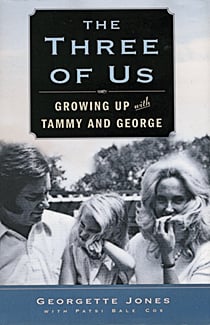 Most newborns don’t attract much attention from Nashville, but when you’re Georgette Jones, the only daughter of country music legends Tammy Wynette and George Jones, you get a signed recording contract in your first few days of life. But even that optimistic gesture, as Jones reveals in her memoir, doesn’t protect you from your life playing out like a country tune, full of heartache and loneliness and being done wrong by.

Jones’s famous parents, who between them had a slew of No. 1 hits in the ’60s, ’70s and ’80s, divorced when she was just four. Summarizing the downfall of their relationship neatly, she writes: “Mom was busy trying to change a man who was digging in his heels.” In The Three of Us, Jones hopes to round out her parents’ reputations: Tammy, as a woman addicted to painkillers and bad men, and George, as a hard-drinking firebrand and unreliable performer. It seems a tough job, though. It’s fitting that her mother’s best-known songs are D-I-V-O-R-C-E—which she did four times—and Stand By Your Man, which she did even when those men exploited her finances, handed out nude photos of her, or, in the case of one, convinced her to show up at a farmhouse and claim to have been carjacked to keep the fact that he had beaten her silly out of the tabloids (none of those indecencies were George’s, for the record). George, whose biggest hit is He Stopped Loving Her Today, comes across as a distant, stereotypical manly man, never allowing himself to be vulnerable, not even with his own daughter.

Remove the element of celebrity, and The Three of Us is a straightforward tale of the too-common trials of growing up in a family where everyone is so busy trying to protect themselves from pain that much goes unsaid. Though Tammy’s death in 1998 brought Georgette closer to her dad, and perhaps freed her to begin shaping her own country music career, the First Lady of Country Music took a lot of secrets to her grave. It leaves the reader, and Georgette, undoubtedly, hankering for more—that, and a helping of Tammy’s famous banana pudding.