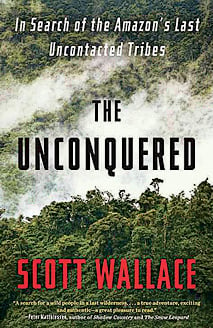 In 2002, Brazilian explorer Sydney Possuelo set out to locate the mysterious flecheiros—Arrow People—thought to be living deep in the Amazon rainforest and one of the last uncontacted tribes left in the world. He never saw them. And he considered his expedition a complete success because of it.

Possuelo was then head of Brazil’s Department of Isolated Indians and author of a unique national policy that sought to protect long-lost tribes. Even the most benign contact, he realized, inevitably brings hardship and death, often by introducing diseases for which natives have no natural defences. Possuelo sought to protect their way of life by creating a sprawling native homeland, Terra Indigenas, off limits to outsiders. To do this, it was necessary to establish the limits of flecheiros territory. Accompanying Possuelo on this arduous three-month journey by riverboat, dugout canoe and foot is National Geographic writer Wallace, who describes the trek in vivid, if unsettling, terms. Both river and jungle provide a seemingly inexhaustible supply of hidden horrors: from poisonous caterpillars to anacondas lurking just below the waterline. The Amazon, writes Wallace, is “an enormous laboratory where the process of evolution continued to unfold by the minute, spawning a mind-boggling array of deadly creatures and toxic plants.”

Humanity proves to be just as hostile. The river system is rife with poachers, drug smugglers, illegal gold miners and violent tribes already acquainted with the dangers of modern life. Then there’s the gradual disintegration of social order within Possuelo’s party, as the group tromps its way into its own heart of darkness. Surviving the trek, if barely, Possuelo finally locates a flecheiros village. It is empty, although they’re likely watching his every move from the jungle. Only later, while flying over the route, does Possuelo actually see the Arrow People, watching as his strange craft buzzes overhead. “I prefer to keep things this way,” he says. “We will never know each other.”

FILED UNDER: Scott Wallace The Unconquered