REVIEW: The Way of Baseball: Finding Stillness at 95 mph 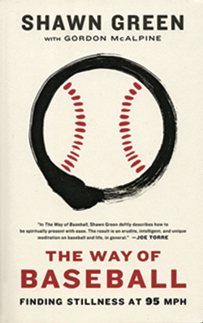 Shawn Green became a much better hitter after he started hitting a lot of balls at a practice tee. But it wasn’t the practice that mattered. The former Toronto Blue Jays player tells us he blossomed into an all-star after he developed a kind of mystical relationship to his tee work: it “became an object worthy of contemplation.” His fascination with the practice swinging allowed him to become a power hitter despite his skinny build. Later on, after an off year with the Los Angeles Dodgers, Green used another practice device, a contraption called “The Dinger,” to “recapture stillness and presence.”

The argument Green sometimes seems to be making is that hitting isn’t a matter of pure athletic ability or park conditions—it’s all about being at one with yourself. “I played the game from a deeper place than ever before,” he says of the 2001 season in which he hit a career high in home runs, and “as a result, my statistics improved and everyone loved me.” The message of the steroid era—which isn’t a major presence in this book—was that success in baseball goes to the biggest and strongest. Green’s story is a more pleasant one about statistical success going to people who are at peace with themselves.

Green can’t always make this argument successfully, in part because so many of the things he describes, including his statistical ups and downs, are standard for every player’s career. And his attempts to explain everything in a quasi-mystical way lead him to some odd conclusions: when he learns that all his tee practice has caused him to sustain an injury, he decides this was “the tee presenting me with yet another important lesson” about keeping the right balance between self-worth and self-deprecation. Or maybe he just swung the bat too many times and got hurt.