REVIEW: This is Not the End of the Book 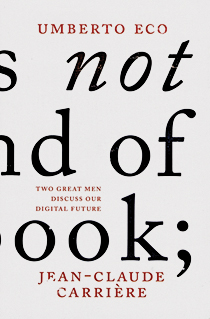 The future of the book in the digital age has lately been much on the minds of philosophers, writers and ordinary readers. Eco and Carrière are all three of those things, the former an Italian semiotician most famous in the English-speaking world for his novel The Name of the Rose (1983), the latter a French screenwriter (The Return of Martin Guerre) best known for his lengthy collaboration with director Luis Buñuel. Nor do they merely make a living by the written word: these two men, both 79, love books the way Queen Elizabeth loves corgis.

Here they speak in turn—the book is arranged as a conversation between them—and manage, on occasion, to stick to the title topic. They do discuss how rapid technological development in some ways makes the traditional book valuable for its staying power: Eco can no longer easily get at the early drafts of his novels, locked away as they are in floppy disks his current computer cannot read. (If he had typed them, he notes, they’d be in his file cabinet.) Always a dab hand at aphorisms, Eco grandly concludes, “The book is like the spoon: once invented, it cannot be bettered.”

But luckily for readers, they don’t usually stay on topic. The old men talk, pointlessly and gloriously, for over 300 pages on anything and everything written and captured in books. They chew over Carrière’s adamant belief that not a single real poem can be found among the tens of thousands of French verses penned in the 18th century; they spend pages on 17th-century Jesuit Athanasius Kircher, summing him up as an early embodiment of the Internet. Kircher knew everything there was to be known about all branches of learning in his time, and half of what he wrote was true and valuable, while half of it was nonsense. The two old men sound like visitors from an already dead civilization, and it is a pleasure, both pointless and delightful, to listen to them.

FILED UNDER: books Jean-Claude Carriere this is not the end of the book Umberto Eco