Review: Those Guys Have All The Fun: Inside The World of ESPN 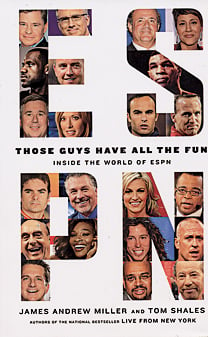 In 1969, Gay Talese turned his razor-sharp eye on the New York Times and produced The Kingdom and the Power, a terrifically detailed, drama-filled portrait of “The Grey Lady.” Now, more than 40 years later, comes the profile of another media heavyweight, ESPN, and while it’s short on the fly-on-the-wall narrative that made Talese a legend, Those Guys Have All The Fun, at 745 door-stopping pages—enough space to cram 550 interviews worth of gossip and navel-gazing—is no less exhaustive. Everyone, it seems, answered the phone when Miller and Shales called. Even ESPN’s all-time biggest egos, namely Bill Simmons, Keith Olbermann and Chris Berman, came out to play.

The authors provide brief italicized intros and let the key players—anchors, executives, athletes, producers, cameramen, even Barack Obama—tell the story of the “sex-crazed frat house in the middle of nowhere” (ESPN is based in Bristol, Conn.). The format pulls readers quickly through the 30-year history of the network: from a $9,000 investment in 1978—on a credit card, no less—to a global behemoth that airs in 200 countries and in 16 languages.

In some ways, this is a business book more than anything else. But there’s plenty about office sexcapades—“adultery was practically an indoor sport”—feuds, and, most damning of all, the sexual harassment rampant in ESPN’s early days. One former CEO even recalls a time in the 1980s when secretaries were literally being pimped out by guys in the mailroom. Fans, of course, will enjoy it for the behind-the-scenes look at the often wild world of sports from those who really did have a front-row seat. And while some sections of this lengthy book drag, the highlights more than make up for it.