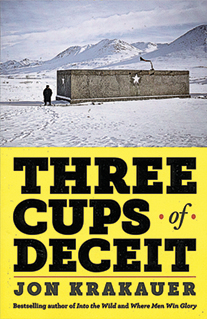 One of the world’s best-known travel and adventure writers, Krakauer (Into Thin Air) was once an enthusiastic supporter of Mortenson, to the extent of donating $75,000 to the latter’s Central Asia Institute, dedicated to building schools in Pakistan and Afghanistan. In that he was not alone: Barack Obama gave $100,000 of his 2009 Nobel Prize earnings to CAI; since 2006, total donations have topped $50 million. Krakauer’s subsequent disillusionment is not with Mortenson’s cause of improving life in one of the most poverty-stricken areas of the globe: all royalties from Three Cups of Deceit are going to another charity active there, the “Stop Girl Trafficking” project of the American Himalayan Foundation. Rather, he is troubled by the seat-of-the-pants way (at best) Mortenson has run CAI—marked by the resignations of financial officers unable to collect proper receipts from its founder—and, perhaps even more, by Mortenson’s backstory.

According to Krakauer, Mortenson’s explanation of how he came to devote his life to school-building—the version set out in his bestselling Three Cups of Tea, the story that brings First World audiences to their feet and millions to CAI—was a myth. According to Three Cups of Deceit, Mortenson did not, as he claims, take a wrong turn after a failed 1993 attempt to climb K2, the world’s second-highest peak; he didn’t end up in a Pakistani village called Korphe, where he was cared for with open-hearted kindness; he didn’t, before he left, promise to build the village a school; he wasn’t (later) kidnapped and held by the Taliban for eight days.

Putting aside Krakauer’s serious allegations about Mortenson’s financial stewardship, does the mythic nature of his story matter? For Krakauer, a ferocious stickler for facts even when they keep a narrative bumpy and ambiguous, there’s no question it does. Among many of Mortenson’s admirers, however, appreciative of the good he has done, the answer seems to be no. For a slim, 75-page J’accuse, Three Cups of Deceit is remarkably thought-provoking.