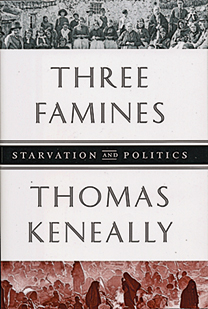 This eye-opening exercise in comparative history by Keneally, an Australian novelist best known for his Booker Prize-winning Schindler’s Ark (later turned into the film Schindler’s List), takes as its starting point Nobel laureate Amartya Kumar Sen’s statement: “No famine has taken place in the history of the world in a functioning democracy.” In many ways, the famines Keneally dissects could not be more different. An Gorta Mor, the Great Hunger, started in Ireland in 1845 when a fungal spore rotted the potatoes in the ground; a century later in Bengal, unusually fierce cyclones and a tsunami wreaked havoc on rice paddies in 1942, a situation worsened by drought the next year; in Ethiopia in the 1970s and ’80s, the rains failed and the teff, the country’s staple grain, withered in the fields.

But just as the result on a fundamental human level was the same—a natural trigger moving subsistence farmers to the wrong side of a tipping point, the slide into starvation and social breakdown, the eventual collapse of basic morality (the aged and very young abandoned, isolated cannibalism)—so too was the common litany of folly and malice that made preventable human disaster unfold like inescapable natural catastrophe. In each case, ideology, governmental contempt for the governed and racial stereotyping were deadlier than any disease or drought.

The British government thought the Irish were natural complainers prone to exaggerating their plight, and even if the situation was bad, the Irish were feckless, over-breeding papists who should bow their heads before the mysterious workings of divine providence. British colonial attitudes were not much more advanced in Bengal in 1943, when imperial officials simultaneously blamed the farmers for hoarding rice and consuming their seed crop. In Ethiopia, the authorities lied to international donors about the extent of the disaster, spent most revenues on arms and withheld food shipments from rebel areas. All told, at least five million people died in the three famines, from causes mostly the same, both physically and politically.