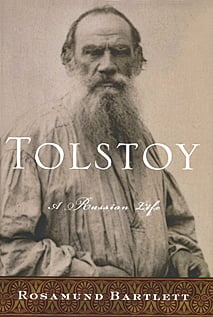 Count Leo Tolstoy—novelist nonpareil, Christian mystic, proto-Communist, mad aristocrat and very embodiment of Mother Russia—may have lived until he was 82, but he has always left the impression that his lifespan was twice as long. One reason is caught in Bartlett’s subtitle: Tolstoy’s wildly eventful 19th-century life (1828 to 1910) spanned all the changes in pre-revolutionary Russia that would make it one of the most important nations of the 20th century. Born in a land without railways, he was eventually filmed by movie cameras wielded by celebrity-hunting American journalists. He died only seven years before the Bolshevik Revolution, but his father was a veteran of the war against Napoleon. At Tolstoy’s birth, the Russian nobility controlled serfs as though they were slaves—his grandparents gave his father a peasant girl when he was 16, for his “health.” Tolstoy abused his female serfs too after he became a landowner at 19, before he squandered his inheritance on gypsy singers and gambling.

Later, after a spiritual crisis in the 1870s, Tolstoy emerged as a Christian heretic opposed to violence and property, and a champion of peasants. (Of interest to Canada, he published his last novel, Resurrection, in 1899 to enable members of the Doukhobor sect to emigrate here.) A later influence on Gandhi and Martin Luther King, Tolstoy the political-religious thinker was also the subject of articles by Lenin. Like most great artists, he matters to most people precisely because of his art, but Bartlett makes a case for the rest of Tolstoy’s life too, and for the real possibility that he would be remembered now, even if he hadn’t written War and Peace and Anna Karenina.

Yet he did write them, and in the end that does matter most. Between the aristocratic excess and the ascetic zeal, Leo Tolstoy, for all his imperiousness and focus on large ideas, demonstrated a genius for observing and describing the smallest changes in human consciousness that has awed his readers ever since.