How we ruined the tomato 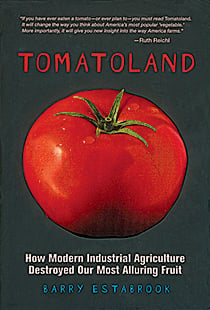 Corruption, deception, slavery, chemical and biological warfare, courtroom dramas, undercover sting operations and murder: Tomatoland is not your typical book on fruit. Journalist Barry Estabrook weaves the fascinating history of tomatoes alongside a cast of renegade characters—including mad-hatter horticulturalists and a lawyer hell-bent on prosecuting human traffickers—through a fast-paced and often harrowing plot.

The story begins with the author driving in Naples, Fla., stuck behind a tractor-trailer stacked high with what appear to be Granny Smith apples. But the perfectly round green spheres, whose skins don’t break when they bounce off the back of the truck onto the roadside, are tomatoes: the sort that nearly everyone is guilty of reaching for in January—and that Americans spent $5 billion on in 2009. Those hard green balls (blasting them with ethylene turns their exteriors red while leaving the interiors underripe and tasteless) contain 30 per cent less vitamin C and about 14 times more sodium than cultivated tomatoes did in 1960. And because the Florida Tomato Committee decrees the exact size, colour, texture and shape of all their exported fruit, Florida tomato farmers, who provide North Americans with one-third of all their tomatoes, have over 100 chemicals in their arsenal to combat insects, bacteria and diseases. But, as Estabrook notes, “nowhere do the regulations mention taste.”

The author’s first-hand accounts of the plights of harvesters, often migrant workers who receive the same pay as those working 30 years ago, are the stuff of nightmares. One picker, who like many doesn’t read or speak English, is shown a pesticide-handling video, in English, has a tank full of pesticide strapped to his back and is sent to the field. By the end of the day, all his toenails have fallen off.