REVIEW: Trudeau Transformed: The Shaping of a Statesman

Book by Max and Monique Nemni, translated by George Tombs 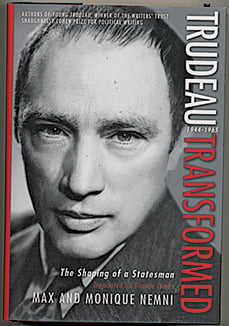 An enduring element of his myth has it that Pierre Trudeau was a dilettante well into adult life. The image of the future prime minister indulging in a motorcycle-riding, beard-growing, job-hopping arrested adolescence has been cultivated both by admirers—it makes him more fun—and detractors—it confirms his lack of seriousness. The Nemnis, a husband-and-wife writing team devoted to burnishing their subject’s memory, set out to demolish the image of an aimless Trudeau.

And they largely succeed. In a previous volume, 2006’s Young Trudeau, they revealed the narrowness of his early thinking, which shockingly featured pro-Fascist sympathies. Now they trace his 1944-47 postgraduate education from Harvard to Paris’s Sciences Po to the London School of Economics. Their painstaking study of his notes, letters and journals shows how Trudeau systematically acquired democratic ideas centred on individual rights and absorbed economic theory.

Previous biographers have viewed his celebrated travels through Asia after his university years as evidence of rootlessness. The Nemnis cite a letter to his mother in which Trudeau writes of setting out “to understand the world’s politics,” and argue that his itinerary shows he followed through. They pounce on evidence that Trudeau later sought out, rather than stumbled into, his key first experience in Ottawa as a junior bureaucrat.

In their telling, Trudeau’s rise in the 1950s as a public intellectual in Quebec—a blur of writing, editing, lecturing and organizing—flows naturally out of what came before. So does his 1965 jump into federal politics, which closes this instalment of their multi-volume project. Of course, the anti-Trudeau camp now ascendant in Canada needn’t buy this laudatory version. But to go on dismissing him as gifted but undisciplined, charismatic but shallow, has just gotten that much less plausible.