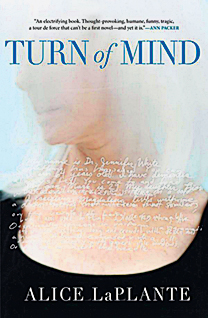 Part medical thriller, part murder mystery, Turn of Mind tells the story of Dr. Jennifer White, an elderly surgeon who may or may not have murdered her best friend. It opens with the death of Amanda O’Toole, a 75-year-old woman whose mutilated body is found in her Chicago home. For reasons that aren’t known, four fingers on her right hand have been expertly removed. White, a renowned doctor (now retired) who once specialized in complicated hand surgeries, was Amanda’s neighbour and closest friend; after the police find several suspicious clues, she also becomes the prime suspect in her murder. Whether Jennifer is guilty, though, remains a mystery even to her: she suffers from Alzheimer’s, and her memory is quickly slipping away.

Jennifer narrates the story in broken fragments that jump forward and back in time, reflecting her own mounting confusion—and frustration—as her mind deteriorates. From this hazy picture a few sharp details emerge, most vividly about Amanda, who’s not just a friend, but also Jennifer’s rival. These two stubborn women butted heads over relationships, money, and especially Jennifer’s children, Mark and Fiona. With none of her own, Amanda became a second mother of sorts to her best friend’s kids, occasionally testing their loyalty in a way that threatened to pull Jennifer’s own family apart. Still, what sorts of actions Jennifer might take to protect her husband and kids—even from Amanda, her best friend—isn’t clear until the end.

Turn of Mind is the first novel from Alice LaPlante, an award-winning non-fiction writer. Narrating through Jennifer’s voice, which leaves certain details just out of reach, LaPlante does a great job of building suspense, finishing with a twist that most won’t anticipate. Beyond being just a satisfying summer read, this book is an examination of a long, complicated friendship, and the capacity of two people who love each other to hurt each other, too. No one in this novel is really innocent: not Amanda (even if she’s ultimately the victim), not Mark or Fiona, and not Jennifer.